The concept of sequential waves of technological innovation — first emerging and disrupting the status quo, and then gradually becoming the status quo—is familiar to students of Schumpeter’s “creative destruction.” But while it’s useful to know that these waves happen, even more useful from the perspective of planning and investing is spotting when one may be about to crest and the next begin. 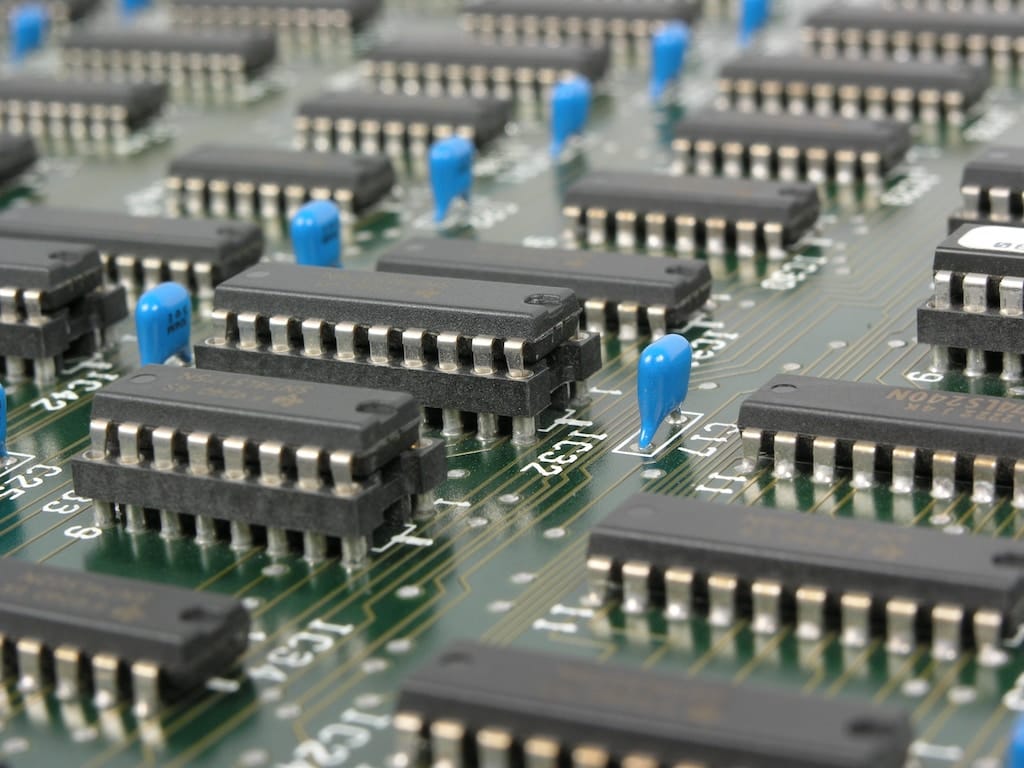 Technology is anything that was invented after you were born, everything else is just stuff.

I’ve spent much of my career at the intersection of publishing and technology, and it took many years for me to realize that describing it that way implies that “publishing” and “technology” are two different things, ignoring that almost everything about “publishing” as we commonly know it today was at one time just as much a “technology” as an iPhone.

In his essay, Twenty Minutes into the Future, George P. Landow, writing around the dawn of the World Wide Web, describes the situation eloquently:

First, one encounters a tendency among many humanists contemplating the possibility that information technology influences culture to assume that before now, before computing, our intellectual culture existed in some pastoral nontechnological realm. Technology, in the lexicon of many humanists, generally means “only that technology of which I am frightened.” In fact, I have frequently heard humanists use the word technology to mean “some intrusive, alien force like computing,” as if pencils, papers, typewriters, and printing presses were in some way natural. Digital technology may be new, but technology, particularly information technology, has permeated all known culture since the beginnings of human history. If we hope to discern the ways in which we might move beyond the book, we must not treat all previous information technologies of language, rhetoric, writing, and printing as nontechnological.

(My favorite examples came from researching the history of publishing in medieval Europe for a conference talk in Frankfurt, and discovering that something as fundamental as word spacing within books developed over the course of 300 years, starting in around 1100. And it took hundreds of years more for punctuation to spread — the hyphen first appeared in the 11th century Europe, and took another 200 years to reach England. The colon didn’t appear until the late 14th century!)

Obviously many technological innovations spread much faster now, but only because they can do so using the now-boring communications and transportation infrastructure of previous waves of innovation.

And that concept of sequential waves of technological innovation — first emerging and disrupting the status quo, and then gradually becoming the status quo—is familiar to students of Schumpeter’s “creative destruction (accessible version here). But while it’s useful to know that these waves happen, even more useful from the perspective of planning and investing is spotting when one may be about to crest and the next begin.

In her book, Technological Revolutions and Financial Capital, Carlota Perez outlines a vocabulary and framework for describing and understanding successive waves of technological innovation:

This book holds that the sequence: technological revolution—financial bubble—collapse—golden age—political unrest, recurs about every half century and is based on causal mechanisms that are in the nature of capitalism.

The first four of those waves began with the Industrial Revolution in 1771, followed by: the Age of Steam & Railways; the Age of Electricity and Heavy Engineering; and the Age of Oil, the Automobile and Mass Production. She labels the fifth wave—well underway at the time of her writing in 2003—the Age of Information and Telecommunications, noting its birth as the 1971 introduction of the Intel microprocessor.

If these waves tend to last about 50 years, then the theory would suggest it’s just about time to look for clear signs that we’re far into what Perez labels the “Deployment” stage:

When an innovation is within the natural trajectory of the prevailing paradigm, then everybody — from engineers through investors to consumers – understands what the product is good for and can probably suggest what to improve. Even such minor and doubtfully useful products as the electric can-opener or the electric carving knife are thought worth designing, producing, buying and using in a world that is already accustomed to dozens of electrical appliances in the kitchen. The same happens with the successive applications of the general principles of the prevailing paradigm. In the case of continuous mass production, for example, after manufacturing had fully developed all its principles and refined its organizational practices, the task of applying the model to any other activity became straightforward. Mass tourism, of the ‘assembly-line’ type, moving people from airplane to bus, from bus to hotel and from hotel to bus, was obvious to conceive, easy to put into practice and readily accepted by consumers at the time.

Or to borrow from Kay’s phrasing, Deployment is when yesterday’s “technology” starts to become tomorrow “just stuff”.

So what’s the evidence that we’re now squarely in that “Deployment” stage, and therefore nearing the dawn of the next technological revolution (as well as primed for some, ahem, political unrest)?

1. “Technology” is fully diffusing into every industry and corporate department

I’ve spent a fair bit of time lately in what’s knows as the “Ed Tech” market (short for “Educational Technology”). And that’s meant keeping an eye on the competitive landscape, which at times seems to be changing every day with new products, services, and startups chasing opportunities. A useful tool for navigating those changes is one of the many landscape maps provided by bloggers, analysts, and investors, like this one: 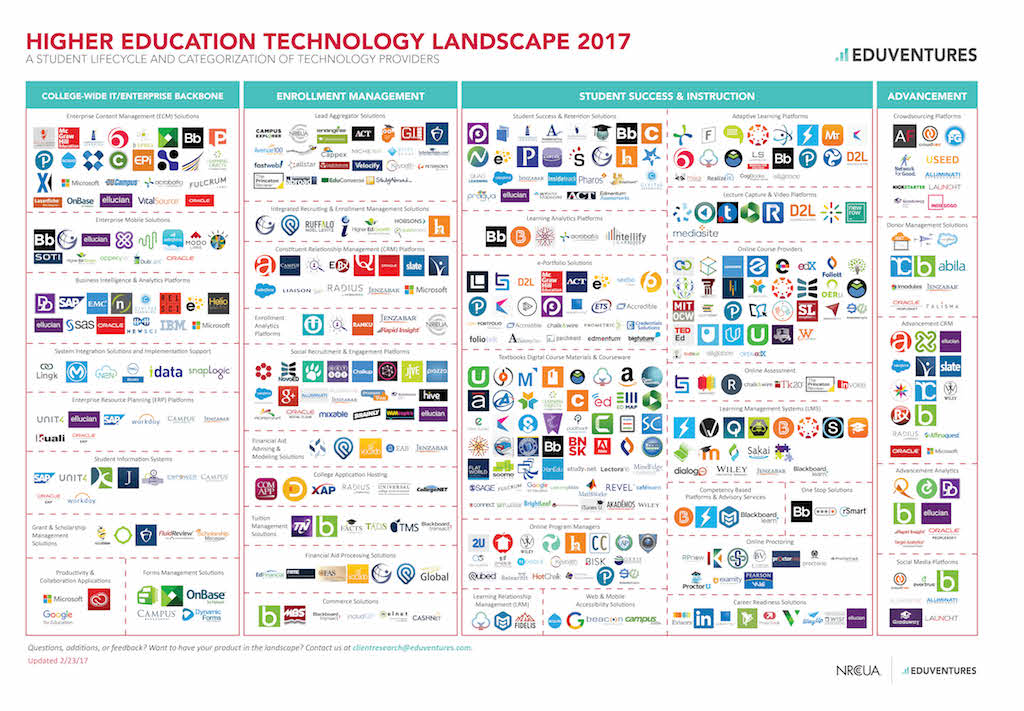 And while these kinds of maps have been around for a long time, during the past few years something has changed, and they have proliferated explosively. (There are many others even just for Ed Tech, for example here’s one from the folks at Degreed.) You can now find one of these “market maps” for just about any traditional corporate function. Here’s Sales: 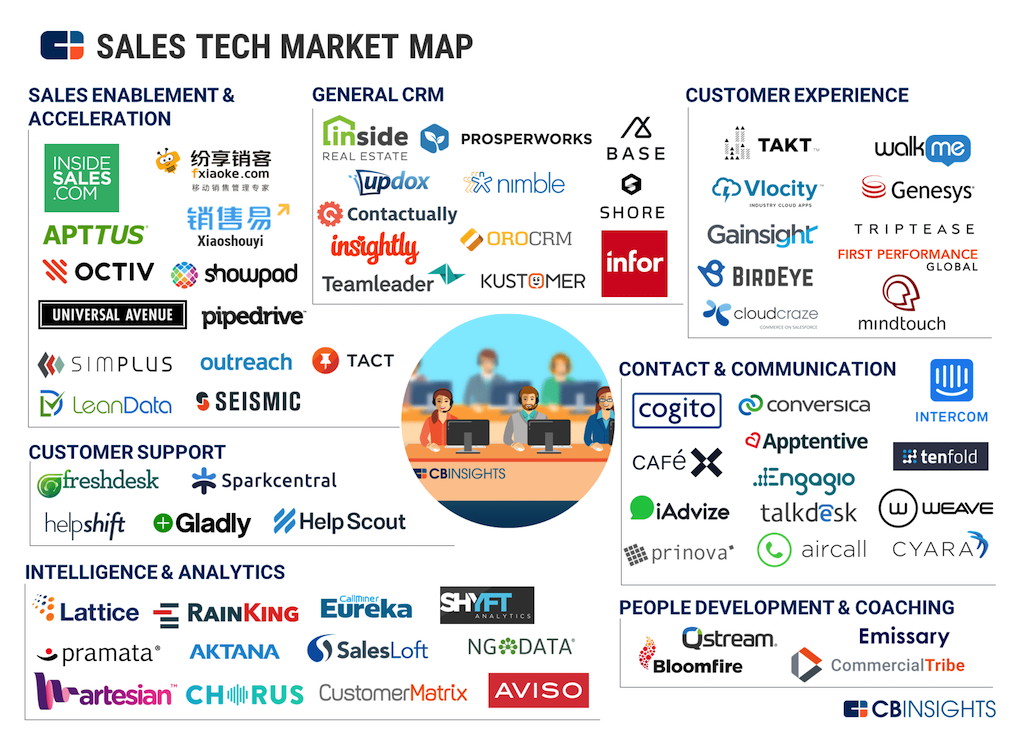 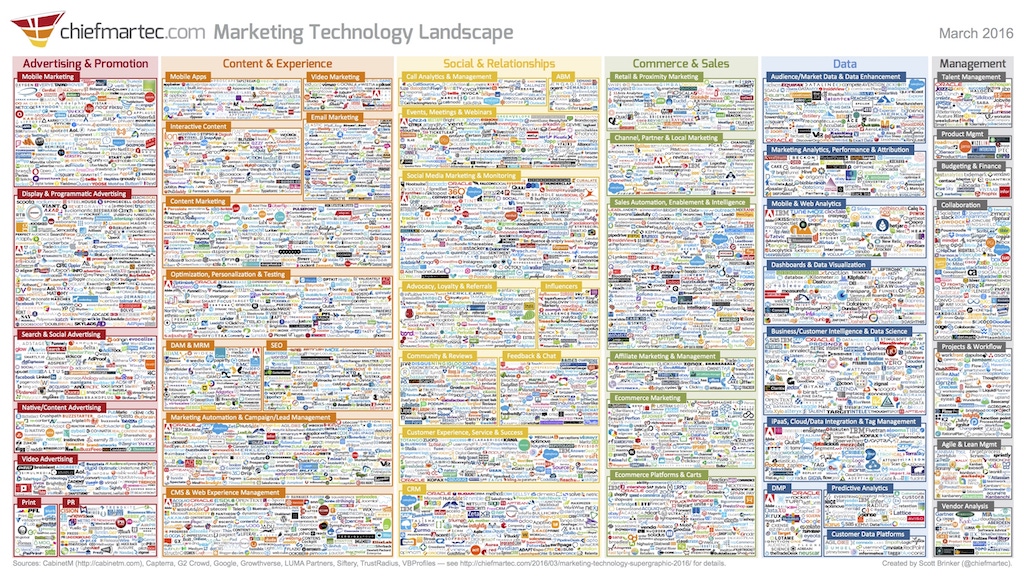 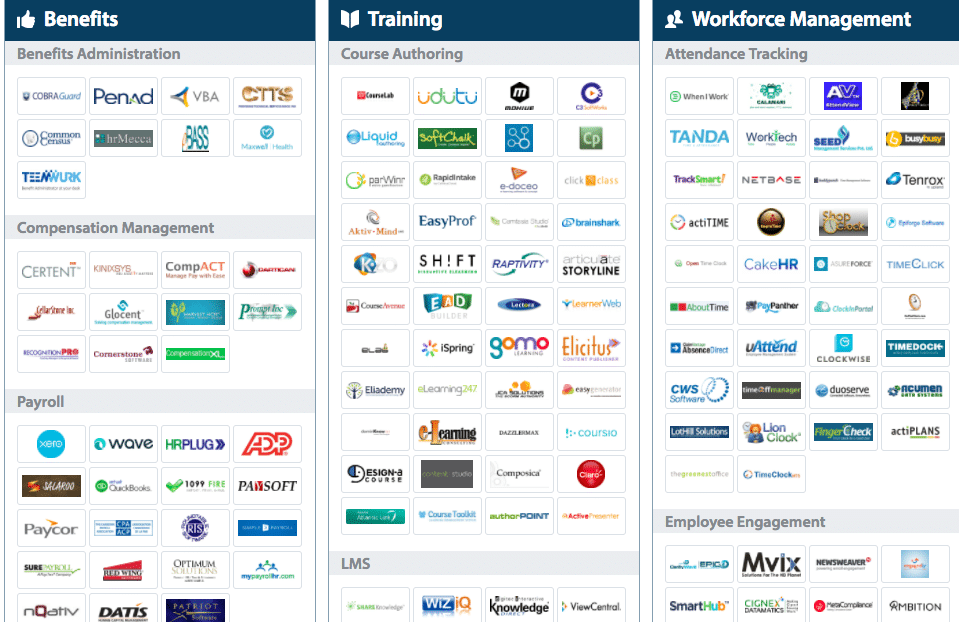 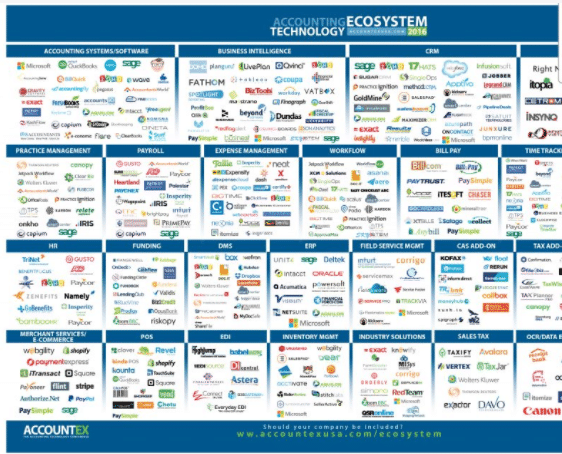 You can also see it across major segments of our economy, like Finance (aka “Fintech”), Travel, and Commercial Real Estate. And to help you navigate all of these landscape maps, the folks at CB Insights have compiled this helpful list of 45(!) different Market Maps.

Technology is no longer a separate department or function but is now permeating our economy, and as Perez would put it, the new paradigm is becoming just “common sense”.

Another hallmark of each successive “surge” of innovation and then its diffusion into the wider economy is when the “new” economy companies begin overtaking the “old” ones as the engines of overall economic growth. Here’s a chart from Perez’s book showing how Oil and Auto firms (the “technology” companies of their day) displaced steel over a 30-year period: 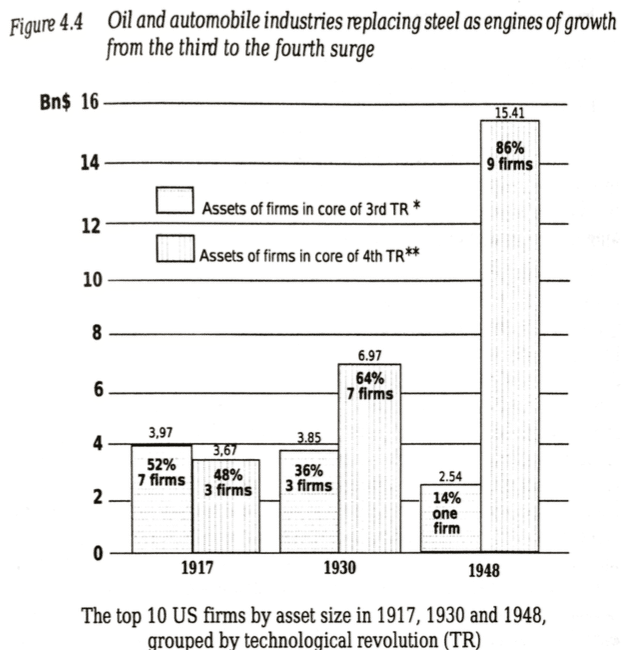 Now consider a similar look atop the S&P 500 today, where the takeover by companies of the 5th surge is well underway: 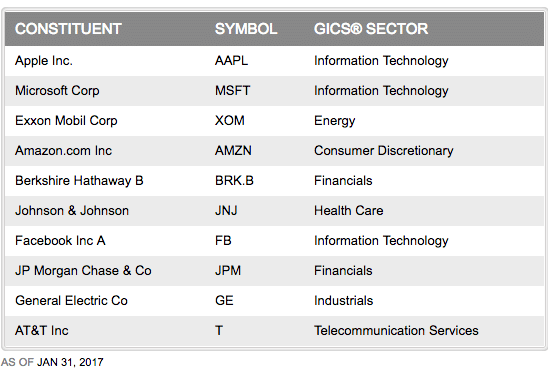 VC maven Mary Meeker’s 2016 Internet Trends report was her usual fascinating snapshot into what’s happening on and around the Web, and it included a useful comparison of “old” vs “new” economy companies and their valuations relative to their revenue:

(One obvious interpretation of the market-cap-to-revenue disparity is that investors believe the best days are ahead for Amazon and Netflix, and likely the opposite for Wal-Mart and Viacom.)

One of my favorite strategic analysis tools is Simon Wardley’s eponymous mapping framework. A premise of the tool is that any given technology will eventually follow this path:

Not every technology will proceed through at the same pace, and some would seem to get stuck along the way, but overall it’s quite a useful model.

So it was with amusement that I read the following passage about Amazon from an Economist column on whether tech firms are currently overvalued:

(Amazon) is one of the most optimistically valued firms, with 92% of its current worth justified by profits after 2020. Outside investors have a lot at stake because it is huge, with a market value of $410bn. About a third of this value is justified by its profitable cloud-computing arm, AWS. But the rest of the firm, which straddles e-commerce, television and films, as well as logistics, barely makes money despite generating large sales. Nor is it growing particularly fast for its industry. To justify its valuation you need to believe that it becomes a sort of giant utility for e-commerce which by 2025 cranks out profits of around $55bn a year, or probably more than any other firm in America.* (Emphasis added)*

The reason I was amused is because “giant utility” is exactly how many investors are valuing Amazon, and that’s in part because it’s already behaving that way:

According to Synergy Research Group, AWS owns 40% of the cloud services market, meaning it’s responsible for the operability of large swaths of popular websites. So if AWS goes down, it takes a huge number of businesses, apps, and publishers with it.

The map is not the territory

While Schumpeter, Perez, Wardley, and others offer incredibly useful tools for understanding the interplay between technological innovation and economic activity, ultimately they are just tools. We may be “due” for the end of one cycle and the beginning of the next, but reality is of course often far less predictable (and ultimately far more interesting!) than a model.

To say that we are nearing the end of one of these 50ish-year cycles is not to imply that “technology” as we commonly mean it today will disappear, any more than we have said goodbye to mass production or steel or electricity. Rather, the nearly ubiquitous infrastructure of the Internet, the World Wide Web, pervasive mobile broadband, and the “internet of things” including mobile computers, phones, and sensors on nearly every person and in many building and vehicles, will likely be part of the core “infrastructure” for whatever revolution comes next.

And as the father of two children who could navigate a smartphone before they could walk, I’m excited to see what kinds of things they will call “technology”.