The Banality of the Bitcoin Bubble

Bitcoin's a bubble, but bubbles are a common feature of capitalism, quickly diffusing technological innovations. How to learn what matters most about this new technology without losing your shirt. 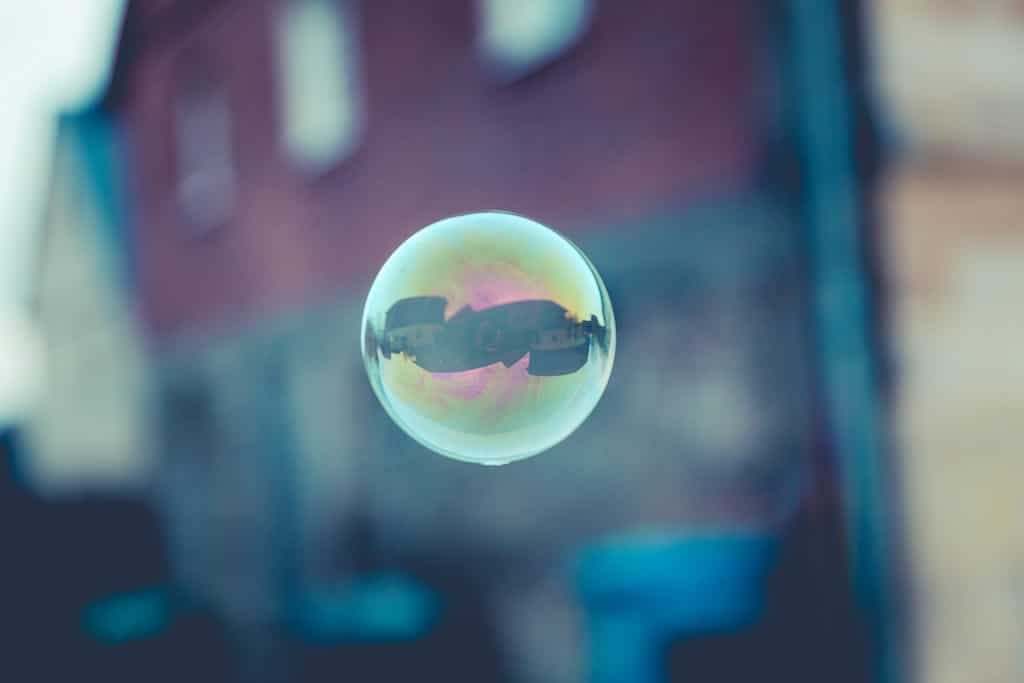 Throughout the history of capitalism, financial bubbles have emerged and exploded wherever liquid markets in assets exist. The objects of speculation have ranged across a spectrum that challenges the imagination: from tulip bulbs, to gold and silver mines, to the debt of newly established countries of unknowable wealth and – again and again – by way of real estate and of the shares that represent ownership of corporations. The central dynamic is that the price of the financial asset is separated from any concern with the underlying cash flows – past, present or possible future – generated by the economic assets it represents.

It’s hardly controversial to proclaim Bitcoin (and the wider “cryptocurrency” ecosystem) as an asset bubble. Where things get trickier is the question of what to *do* about it.

One quite reasonable and rational choice is simply to stay away entirely and hope to minimize any collateral damage inflicted from the inevitable collapse of the Bitcoin bubble.

Another less reasonable (but no less rational) choice is to go along for the ride, risking no more than you can afford to lose entirely, and hope to get out before the music stops — ideally after pocketing a tidy profit.

It is neither reasonable nor rational to either imagine this isn’t a speculative bubble, or to place at risk any more of your net worth than you would be willing to depart with forever.

But I also think it’s unreasonable to simply ignore bubbles on this scale — not because I think you should try and “get a piece of the action”, but because these kinds of bubbles are a regular feature of capitalist economies, and often portend important major technological, social, political, and economic changes.

Think about the Dotcom bubble of the turn of the millennium: were Pets.com and Webvan terrible investments? Yes! But was e-commerce in fact a profoundly disruptive force destined to reshape our daily lives and the global economy along with it? Totes. And while obviously (in hindsight) those structural changes simply couldn’t happen fast enough to save Pets.com or Webvan, it’s remarkable how much has changed about how we buy pet supplies and groceries in less than 20 years (see also: Chewy.com and Instacart).

So while investing in any of the top NASDAQ companies in 2000 would have been a terrible long-term investment, the internet did of course then go on to utterly transform our lives over the next decade.

As Bill Janeway puts it in a chapter whose title I’ve abused for this post — “The Banality of Bubbles”, from his excellent book — these periodic manias of speculative excess serve an important function by “funding the episodic deployment of revolutionary technology at systemic scale”.

To put it another way, the only way a genuinely revolutionary technology (the telegraph, railroads, the computer, the internet…) can actually produce a revolution is if it’s deployed systemically. And because that’s incredibly expensive to do, one way our economy seems to marshal sufficient capital for the job of quick diffusion of innovation is through the promise of great wealth at the heart of any speculative bubble. There’s even academic research to reinforce that while investors are in the throes of a bubble, their “mania” is in fact, quite rational behavior.

It can also happen at different scales—bubbles within bubbles. I recall clearly a few years in the late 90s when perfectly reasonable people started accumulating Beanie Babies because they assumed they could sell them at even higher prices months or years later. While Beanie Babies aren’t a disruptive technology (though they did make their inventor a billionaire…), that particular bubble also introduced millions of Americans to the World Wide Web and some of its nascent variants of e-commerce (at one point the cuddly critters accounted for 10% of all purchases on eBay, and 60% of American households owned at least one —and what better way to monitor the price of one’s “portfolio” than by learning how to check prices on various tracking websites).

When I first wrote about Bitcoin six months ago, my initial modest investment of about $500 had already shot up almost 300% in the prior 12 months. Since then the total increase is now more than 2,000%, and even on a small initial investment amount, returns like that deserve a closer look. (And I’m not the only one revisiting things—soon after the price of a single Bitcoin topped $10K, Hedgeable, the roboadvisor responsible for introducing me to Bitcoin as an alternative asset class in the first place, notified their customers that their recommendation was now to liquidate all Bitcoin holdings as simply too volatile!)

Coinbase, the most mainstream way to buy and sell Bitcoin (along with Litecoin and Ether, two other cryptocurrencies) has recently overtaken Instagram as the most popular iOS App, and enough holiday discussions among friends and family have involved Bitcoin to generate a noticeable bump in the Bitcoin price 5 days after the Thanksgiving weekend (5 days being the typical delay between opening a Coinbase account and processing one’s first transaction from money transferred from a bank account).

More recently, two of the biggest commodities exchanges have opened futures trading in Bitcoin, pushing it closer to the mainstream (and don’t be surprised to see a Bitcoin ETF in 2018).

To be clear, these are not signals that Bitcoin isn’t a bubble. They’re signals that the bubble is working, and is systemically diffusing the underlying innovation of distributed ledgers and decentralized transactions. Personally, I think Bitcoin is in many ways what Paypal imagined it could (or should) be when it started. (Indeed, there’s even a few folks out there speculating that Paypal co-founder Elon Musk himself is the mysterious genius behind Bitcoin).

For all the hype, Bitcoin (or more properly the underlying set of technologies and mechanisms it represents) is just another in a long line of technological and financial innovations stretching back to language through writing, the barter system, then printing and the telegraph, paper currency, the lightbulb, the joint stock company, the steam engine, the mutual fund, and so on. My children will find it as difficult to imagine a world without distributed ledgers as I do a world without the telephone or a credit card.

So no, it’s not different, or “new economics” this time around either, and when the bubble eventually pops it will leave a lot of people financially worse off than when it started. But what’s also not different about this bubble is that it’s a symptom of the rapid diffusion of a profoundly disruptive innovation that will affect our lives in ways we can’t even imagine yet.

So Should You “Invest” in Bitcoin?

The airquotes are there for a reason. By almost any traditional definition of “investing” Bitcoin (or Litecoin or Ether) are hardly investments. I am not an investment advisor and you should consult sources beyond the internet for your own situation. But I can tell you what I’ve done so far, and what I’m doing now. Perhaps it will be of use.

I think it’s important to have bought and sold some cryptocurrency to try and understand Bitcoin and the related ecosystem. Coinbase and others have lowered the learning curve, but for all the hype, it still takes quite a bit more effort (and time) than you probably expect to actually complete a transaction whereby you exchange some of your dollars for some fraction of a Bitcoin. (It is sadly possible to get there faster by using a credit card, but there are zero situations in which that makes any sense).

In addition to the roughly 0.5 Bitcoin I bought via Hedgeable, I also bought about $400 each of Ether and Litecoin from Coinbase in part to go through the motions and just learn by doing. Don’t let the current price of an entire Bitcoin (flirting with $20,000 as of this writing) dissuade you. It is possible to buy tiny fractions of a Bitcoin with just a few dollars, which you can essentially think of as an educational expense to learn more about what will undoubtably be an important technology.

And as the prices of all three have risen, I’ve begun taking the initial investment amounts off the table, converting fractions of my coins back into dollars.

If you’re feeling adventurous, you can also experiment with exchanging one variation of cryptocurrency for another (for example, trading some Bitcoin for some Litecoin, or some Ether for Bitcoin Cash). Coinbase also operates a large exchange called GDAX, where you can trade one currency for another with no fees, and once you’ve created a login on Coinbase, you use the same login credentials to access GDAX. It’s also certainly possible to essentially day trade (and 24 hours a day, as these exchanges don’t close), but the only lesson you’re likely to learn there is how easy it is to lose money by trying to time a market.

Waiting for the bubble to pass and assuming Bitcoin will go away is on par with those who likened the internet to a fad akin to CB radios. While I wouldn’t fault anyone for concluding their money is best kept as far away form Bitcoin as possible, I would urge everyone to invest at least a few hours of their time learning more about the technology and terminology of the space. The giants of the next wave of technological innovation will eventually emerge from the ashes of the inevitable “Bitcoin bubble”. And investors who are already familiar with the technology will be in a much better position to evaluate new opportunities coming along the way.

(Another side effect of actually buying a small amount of Bitcoin or another cryptocurrency? It will increase your motivation and interest in reading more about the ecosystem, its history, and what various opinions are about it’s future. Obviously you don’t need to buy anything to read what’s linked below. But by buying one or more of the mainstream cryptocurrencies using an amount of money you’re comfortable parting with — say the same amount you’d spend on a nice evening out, or perhaps a quick weekend getaway—you’ll get a lot more out of what you read, because it will be about some of your money.)

Here’s some recommended reading from my own research and travels to get you started:

Here’s my prediction on the Bitcoin bubble: About 10 years from now we’ll see a flurry of stories about the great Bitcoin Bubble of 2018(ish), with various examples of the small group of big winners along with plenty of regrettable stories of investors who lost huge sums trying be one of them.

Another aspect of the emerging cryptocurrency and blockchain ecosystem is a new form of capital raising referred to as “Initial Coin Offerings”, which have sucked in more than $2B of capital this year. There are some indications we’ll see legitimate offerings with the rise of Reg D platform Coinlist and the upcoming addition of ICOs to StartEngine, but on balance most ICOs leave me wanting to run in the opposite direction (case in point, try making any sense of this “whitepaper” from LAToken). I’ll have more to say in an upcoming post, but I have not personally invested in any ICOs and have no intention of doing so.

Want to learn more but aren’t sure where to start? You can explore 120 crowdfunding investment platforms in our database and learn more about the nuts and bolts of crowdfunding and alternative investing on our blog. Did you know you can use a self-directed retirement account to invest in many alternative investments? Rocket Dollar makes it easy, and when you sign up using that link you'll be helping to support YieldTalk.